He graduated with honours from the National Higher Conservatory of Music in Paris in the oboe and chamber music class. He is the winner of 5 international music competitions in Ancona, Prague, Munich, Belgrade and Geneva. Since 1987 he has led the oboe and chamber music class at his alma mater. In 1997-2009, he was also a lecturer at the Guildhall School of Music in London. Besides a career as a soloist and teacher, David Walter is also involved in conducting and composing activities. As a conductor, he has led e.g. the Mariinsky Theater Orchestra in St. Petersburg, Simon Bolivar Symphony Orchestra in Caracas, Orchestre National  d’Île de France, National Opera of Bordeaux, Royal Chamber Orchestra of Wallonia, as well as symphonic ensembles in Lisbon, Rennes and Clermont-Ferrand.

The artist’s discography includes a rich cross-section of the history of European music, from Couperin to Stockhausen. In 1980, he was one of the founders of the Moragues Quintet, with which he has performed until today. In the field of chamber music, he also cooperates with many other partners. David Walter is the author of transcriptions of over 1,000 works (from sonatas to opera). He is also the author of about one hundred original works. His opera-fairy tale La jeune fille sans mains, based on one of the Grimm fairy tales adapted by Emmanuelle Cordoliani, was premiered in Dijon on 10 February 2015.

DATE OF THE COURS: 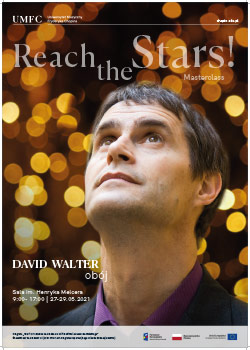