Jerzy Maksymiuk was born in Grodno. He holds diplomas in piano (Jerzy Lefeld’s class) composition (Piotr Perkowski’s class) and conducting (Bogusław Madey’s class) from the Warsaw Conservatory. In 1961 he won the first prize in the National Ignacy Jan Paderewski Piano Competition in Bydgoszcz. Conducting, however, soon became his principal career.

Jerzy Maksymiuk has always promoted contemporary music. He is one of the founders of the Polish Contemporary Music Society. He took part in a number of Warsaw Autumn festivals (two Orpheus awards) and conducted over 200 premiere performances of contemporary pieces across the globe. To mark his achievements the Strathclyde University in Glasgow awarded him with the Honorary Degree of Doctor of Letters. He was also presented with the prestigious Gold Medal from the Elgar Society for promoting Edward Elgar’s music worldwide.

Jerzy Maksymiuk is also a composer of symphonic music, chamber and ballet pieces, songs and film scores. “Expront” (1980) is his favourite piece among older works. as far as film music is concerned he is particularly pleased with his score “Sanatorium Under the Sign of the Hourglass” directed by Wojciech Has.

The last few years were very fruitful for Mr Maksymiuk as composer. His recent works include ”A Lonely Star over Be’er Sheva” (2010) for quintet, “Vivaldi in Boston” for srring orchestra and string quartet (2010) “Leaves Somewhere Falling” for chamber orchestra and piano (2011),”Heart Lamentation, Kielce In Memoriam” for orchestra, clarinet and soprano (2012) . His 85-minute score for the silent film “Mania” starring Pola Negri was performed live in 2012 during cinema shows in London, Madrid, Paris, Kiev, Berlin and Warsaw.

Maestro Maksymiuk has received a number of medals, including Commander’s Cross of the Order of Merit of the Republic of Poland and the Gloria Artis Gold Medal. The Polish Radio awarded him with the Diamond Baton. He also won Superwiktor, a lifetime achievement award for outstanding television personalities. Mr Maksymiuk is the Honorary Citizen of Białystok.

DATE OF THE COURS: 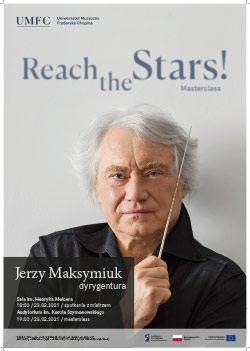